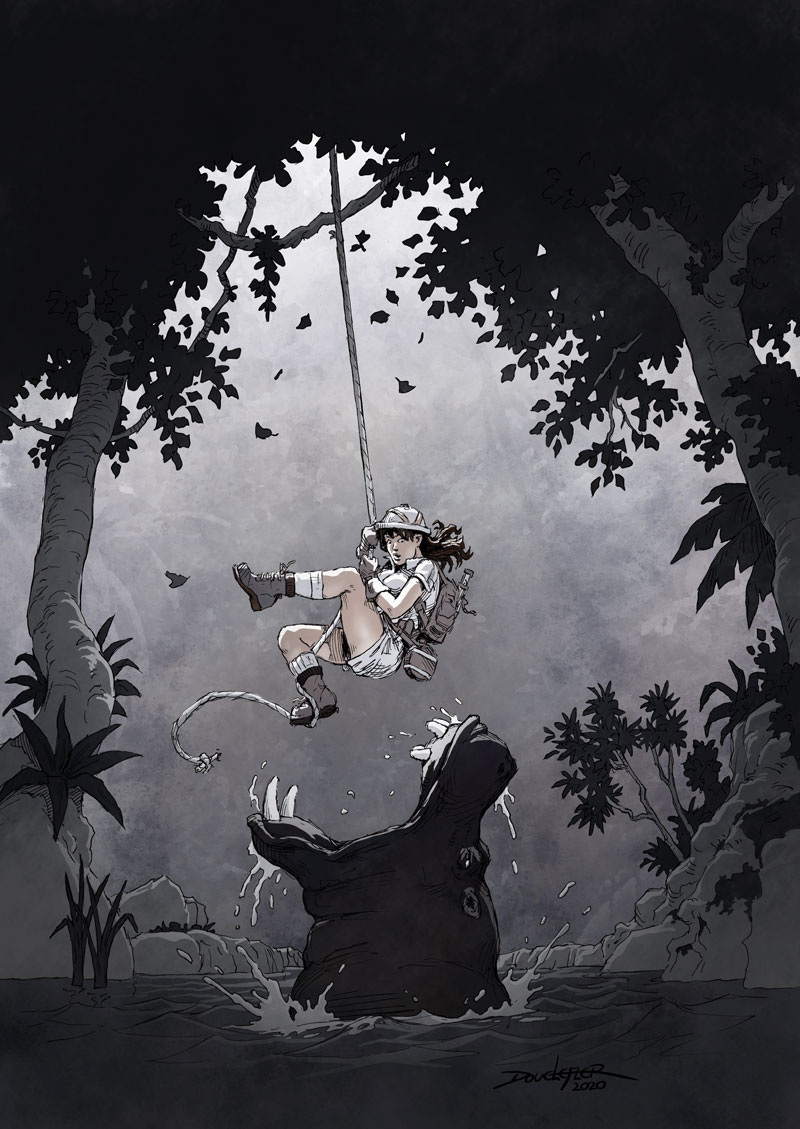 Designing action sequences has been a significant aspect of my long career in the entertainment industry, approaching the challenge from different angles as a writer, director, and storyboard artist. I hope that the concepts I will delineate can be helpful to filmmakers, comic book creators, and fiction writers.

The most common issue I find when reading action sequences is that they digress into a list of events. Even excellent writers can struggle to make a battle, fistfight, chase, or escape into an extension of the characters’ personalities and not something that happens to them. However, if you can write an argument, you can write a fight; they contain the same elements. In many cases,  you improve action by revealing characters’ desires and anticipations. So for you filmmakers, add more close-ups!

Writing action requires more description (and likely an increase in word count) when the emotional pace of a story should increase. Taking time to reveal peoples’ hopes and frustrations can seem extraneous, but they are why we care. Keeping the narrative’s energy moving forward while including all the information necessary to engage your audience means extra effort, time, and wordsmithing. But, hey, no one said it would be easy, and if they did, they were lying.

Before we can care about characters, we have to know what they want.

I approach the study of dramaturgy the same way I do anatomy and perspective for illustration; they are things to learn so that you do not need to think about them when you create. Instead, anatomy and perspective should become instinct, allowing you to concentrate on composition and expression. You learn the principles of character and structure so that you can forget them, ignore them, or deliberately break them when you write.

Storytelling is a process of posing compelling questions and providing unexpected answers. Additionally, most stories need a beginning, middle, and end and should include the three dramatic elements of Objective, Obstacle, and Ticking Clock. All of these elements can also exist in an action sequence. I approach action scenes like they are a three-act play; somebody wants something that someone or something else is hindering, and there is a time limit that necessitates the action to happen now.

The protagonist of a story is the person who wants something and is proactively working to achieve their object of desire. The antagonist is the person trying to thwart the protagonist. In the lion’s share of actions stories, the protagonist is doing something construed as harmful to others (e.g., the scientist who wants to rule the world and has invented a nifty weather-controlling machine to facilitate that end). The “hero” tries to stop the protagonist from realizing their desire. Therefore, although it might be counter-intuitive, the “villain” is often the protagonist, and the “hero” is the antagonist. Since proactive characters are more interesting than reactive characters, we like the “villain” more than the “hero” in many action stories. I’m using quotation marks on “hero” and “villain” because I prefer not to make value judgments on characters. The audience gets to label our characters, but as writers, we should love all of our children equally.

There are exceptions to the “hero as antagonist” trend in action stories. Daniel Dravot’s ambition driving the story straight into his demise in “The Man Who Would Be King” comes to mind, but we need more of these! It is generally easier to write a story where something interesting happens to someone rather than someone doing something interesting that instigates the narrative.

An action sequence can ask a similar question as a complete story; “how will THIS character overcome THIS obstacle before THIS unstoppable event occurs?” Pitting the objective against the obstacle is the art of balancing equal but different forces. If those forces are disproportionate, the outcome is either apparent or happens by convenience. Therefore if one side has more significant resources, you must balance the opposing side with superior determination (or another equal but different attribute). Another example might be if one fighter has more strength, but his opponent has greater intelligence.

By clearly orchestrating different but equal forces, we create engagement. For example, if the strongest person in the world is going to fight the fastest, our imagination is presented with a challenge: how can speed overcome strength? How can strength circumvent speed? In storytelling, engagement is everything. We create engagement by giving the audience information in advance and allowing them to fill in the blanks during the action. We can participate in the events knowing what the characters want and what tools they use to get it (speed, strength, intelligence).

No matter how inventive the action is, if we do not know the objectives and cannot anticipate how characters might overcome obstacles, we are merely witnessing a series of events. We become a victim of the story rather than a participant.

When we know the nature of the objective (what someone wants and their preferred method of getting it), and we know the qualities of the obstacle (presenting an equal but different challenge to the objective), we are in a better position to make the audience care about the outcome. The ticking clock helps build tension and demands the story must progress to its ultimate conclusion.

A film editor once told me you always want to have a third thing you can cut to in a scene. It could be a child’s reaction to her parents’ argument or a fuse burning towards a stick of dynamite.

The ticking clock is a force majeure outside the obstacle, escalating the conflict with a time limit.In an action sequence, having a burning fuse or a timer on a doomsday bomb clicking relentlessly toward zero effectively builds tension. However, a preferable force majeure is a story element that you can delay by dent of great effort but cannot stop. For example, someone might try plugging the cracks in a dam to give the village downstream a chance to evacuate. In this case, dam breaking is inevitable, but one person delays the outcome long enough for something else to occur. The reason this approach can be better is that it allows for invention. We pit the attributes of a character against the characteristics of the force majeure. And there is something readily compelling about watching someone struggle against insurmountable odds.

Engagement is essential in all storytelling, but it can be the first thing lost in an action sequence. Reversals are helpful because they push you to display the characters’ intentions and anticipations. For example, if a scene ends in a standoff, you might start it with your people planning an escape. Or, if you have a confrontation, you could start with the intention to make peace.

There is a restaurant scene in the movie “Kramer Vs. Kramer” between Dustin Hoffman and Meryl Streep. Streep’s character is there to demand custody of their son. During filming, this exchange was confrontational but flat. They revised the top of the scene with Hoffman thinking Streep wanted to get back together with him, adding a dynamic arc to the scene. (I know “Kramer Vs. Kramer” is a drama, but I stated earlier that you could write a fistfight if you can write an argument).

With a reversal, you lead your audience to anticipate a specific outcome, only to have the opposite occur. A Reversal can change things for the better or worse. Consider the duel in “The Princess Bride” (written by William Goldman, a master of the Reversal). Inigo Montoya is anticipating the sword fight with the man-in-black will be over too quickly, so he decides to fight his opponent with his left hand. The first pleasant surprise is that the man-in-black gives Inigo a welcome challenge; he may even be the better swordsman. But Inigo confidently switched the sword to his right hand, and the battle tips in his favor until the man-in-black confesses, “I’m not left-handed, either.” At this point, the battle turns permanently against Inigo.

Suppose you have conceived a clever way to defeat the invading armada of space aliens. In that case, you might retrofit an obvious, cliché, or less imaginative solution and lead the audience in that direction. Then, throw obstacles at your characters, deny them the anticipated, mundane resolution, and surprise everyone with your better idea. An example of this is the prison escape from The Count of Monte Cristo. Young Edmond joins forces with an older prisoner named Faria to tunnel out of their cells. Digging your way to freedom is not an original concept, but it is easy to understand. Edmond and Faria spend years working on their tunnel. Finally, it looks like they will succeed when Faria suffers a stroke and dies. Edmond can not complete their plan by himself, so instead, he exchanges himself for his mentor in Faria’s bodybag and escapes when the guards throw him into the sea.

We believe that characters want something based on how much effort they put into getting it. So having them put effort into one solution, and when it fails, they move on to a different option, deepens our engagement.

In drama, an excellent way to create a crisis (but not the only way) is to pit your protagonist’s goal against something that they value, and as a result of their decisions, they lose both. For example, let us say you value your father’s approval, and you want to marry the daughter of his enemy. You decide to marry the girl you love, your father disowns you, and then your fiancé dumps you. Crisis achieved. In the microcosm of an action sequence, this could come when a character must decide if she will leap for the vine on the other side of the chasm or stay with the relative safety of the rickety wooden bridge. She jumps, her momentum causing the bridge to collapse behind her, but she successfully catches the vine. And then, the vine breaks.

In the crisis of an action sequence, it is often good to strip the characters of as many options as possible while still allowing them to make decisions that will determine the outcome (always look for opportunities where the characters can make decisions that propel the action forward). Constructing a False Resolution is an effective way to reach a crisis; it allows you to focus all of your characters’ hopes on a solution destined to fail while withholding a better solution until you need it. Hopefully, whatever the resolution, it results from the character’s efforts and decisions, not a deus ex machine.

In other words, avoid swooping the eagles to rescue Frodo and Sam from Mordor. Although, let’s be honest; you’ve lost or won your audience by this point of the story. If the latter, they’ll forgive your use of the eagles, at the small cost of your conscious tormenting you for taking the narrative shortcut.