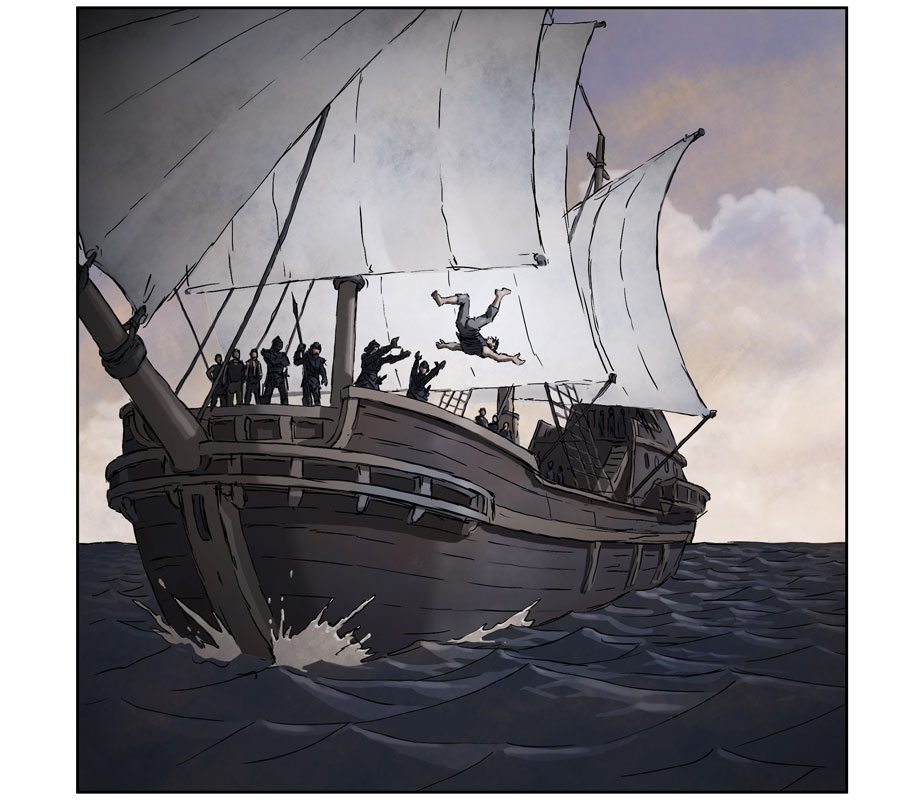 “I probably deserve this,” Durn thought when the guards threw him from the forecastle of the Xebec. He felt a rush of warm evening air before the cruel ocean swallowed him.

When he broke the surface of the water seconds later, Durn saw his former ship plowing relentlessly toward the horizon. The lanterns in the Captain’s quarters were lit, revealing the mysterious passengers who secreted there.

Besides the Captain, Durn was the only one who knew they were there. He had defied orders by climbing down the stern of the ship and peeking through the window. One of the four young women was pushing an empty barrel over the railing. Durn was confused by the thought that she intended the barrel for him.

His argument with the First Mate had been loud enough for the passengers to hear, but why would they be sympathetic to an insignificant sailor like him.  Durn wanted to study the expression on the young woman’s face, but the heartless wind was carrying her and her companions fast away.

When the sun rose on the endless ocean, it shone down on the unfortunate sailor clinging to the empty barrel. As flotation devices went, the barrel was merely adequate. Durn could not climb on top of it. Barrels roll, it is in their design, and they will do so whether on land or in the sea. The morning sun would soon be burning his skin, even the submerged parts, and although water surrounded him, there was not a drop to drink.

Why had he risked everything to glimpse the mysterious passengers sequestered in the Captain’s cabin? The Captain himself did not go there; instead, he bunked with the First Mate and the Navigator. With hope diminishing, Durn thought of his youthful ambition to rise above his station in life. A dream all but killed by the three years he had spent sleeping before the mast.

Lost in his pondering, Durn almost missed the cries of sea birds overhead. His heart quickened at the sound, and he rotated in the water to follow their flight. On the edge of the horizon was a lone island pushing up from the ocean floor. If not for the gulls, he would have missed it.

Too far away for him to swim even if he had a restful night’s sleep behind him, all he could do was hope for the tide to carry him closer.

Durn suddenly felt a tingle as if a warm current was surging past him. Then, from the corner of his left eye, he caught a glimpse of a shape. It was the length of a dolphin but more slender as it skimmed just below the surface of the rolling waves. For a moment, the ocean felt alive and inviting.

The moment was short-lived. The sailor sensed the shark’s presence before he saw its huge fin cutting the rolling surface of the ocean.  Durn controlled his fear and remained motionless. The creature was in pursuit of something, and Durn saw no profit in distracting it.

What he did next, Durn did without deliberation. He abandoned the barrel and caught hold of the dorsal fin as it sliced the water next to him. It was a desperate move by a desperate man. But the shark was moving quickly in the direction he wanted to go. If it carried him halfway to his destination (assuming he did not get eaten in the process), he might swim the rest of the distance.

For several heightened moments, the young sailor’s plan seemed to be working. He kept his eyes focused on the island growing larger before him and not on the 2,500 lbs of sea predator taking him there. He was gauging the best moment to divest himself of his transportation when the creature the shark was pursuing breached the waves.

A shift in Durn’s perception of the world immediately occurred. He wanted to believe that what he had seen were two separate living things, one human and one fish, but that idea was proving a hard sell.

In meager heartbeats, the creature would be experiencing the shark’s teeth unless the sailor intervened. But what could a six-foot land dweller do against a twenty-four-foot carnivore in its preferred environment?

The shark had three tender parts. Its snout and its eyes were beyond the sailor’s reach, so Durn slid his right hand between the great fish’s gill, grabbed a handful of the soft flesh inside, and twisted with all the strength he had left.

The results were immediate. The giant predator thrashed violently, throwing Durn from its back and striking him in the head with its tail.

Everything went black and reasonable people might assume this was the end of the impetuous young man’s story.