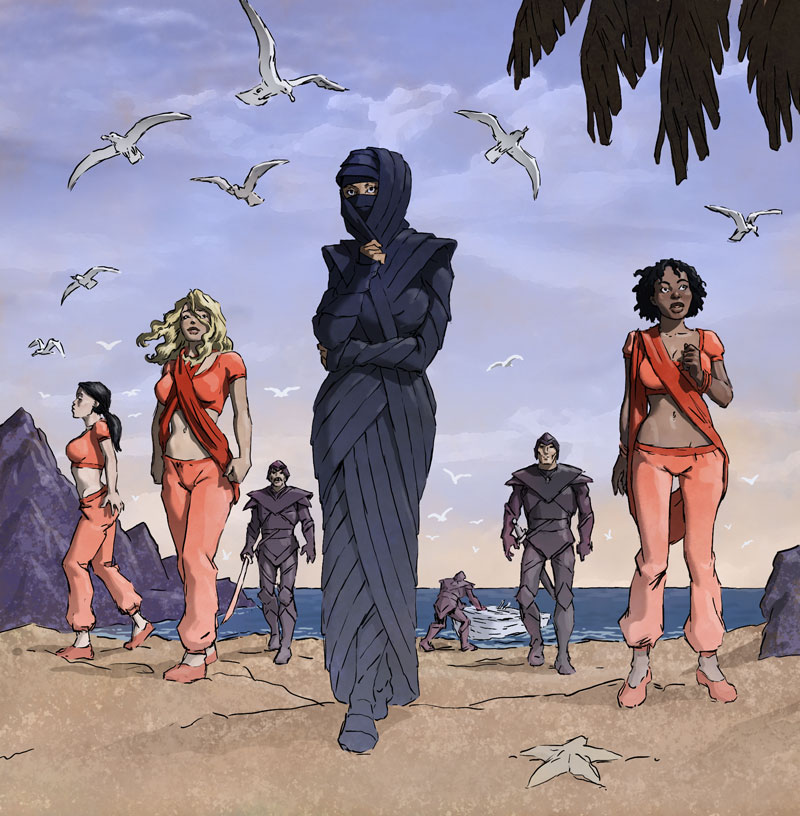 “Inform your Mistress that this will not stand.”

The surf was teasing the launch’s stern while three Krimsian Guards waited in the sand near the vessel’s bow. The sky and the beach were white, with sea birds attracted by the novelty of humans on their shores.

“You have been paid in full for your services,” Syisha did not want to prolong this parting for fear that they would all lose their nerve. “Please cast off before you miss your rendezvous.”

“We are not interested in further profit,” insisted Rowl, the Captain of the Krimsian Guard. “But our reputations would suffer if we left clients to face the legendary perils of Disiri Island alone. We understand you seek something beyond these cliffs, at the very heart of the Three Rings.”

“It is not the island that endangers you,” the men turned to face Lady Nacia Oriandra. She was covered head to toe in her purple robes, the color of death. The hint of her eyes was visible beneath the shade of her hood. These were the first words she had ever spoken to them. “It is I.”

There was a raucous squawking among the gulls. A single raven, the color of midnight, had appeared. The other birds scattered to avoid it. Syisha, Song, and Jewell circled the Lady of Oriandra.

“If you love life,” Syisha shouted to the men. “Leave while you can!”

The squawking escalated into a cacophony as the seabirds took flight. Two more ravens had inexplicably joined the first. Rowl’s companions, Pike and Cort, fell into position flanking their Captain, hands tight on the hilts of sabers. Now there were five, seven, a score of the northern birds incongruously gathered on this tropical beach. They circled in tight formation above a rock at the foot of the Disiri cliffs, coalesced into a chaotic mass that resolved into the shape of a tall man. His robes, the color of midnight, remained a chaotic silhouette, the outline of which was occasionally interrupted by the flutter of a black wing.

Three sabers sang with the reverberation of tempered steel drawn from scabbards.

“Greetings, Milady,” said Cagi Nor, the Nightling Thaumaturge. His voice was surprisingly mundane, like that of a money lender. “Congratulations. Your little party has survived many challenges to reach this most obscure of islands.”

“Stand down!” Nacia shouted to the Krimsians. She faced the Thaumaturge. “Be merciful, Cagi. Let these men go. They have earned their lives.”

“But Milady,” replied the tall man. “After braving so much for you, don’t they deserve to see your face?”             Cagi Nor gave a wave of the hand as if he were brushing lint from a hat. Nacia’s hood erupted in a cloud of purple butterflies that flitted into the air.

The Lady of Oriandra was as slender as her three companions. Her face was delicately proportioned and symmetrical, and yet at the sight of her, Pike, who was standing closet, dropped his sword and moved forward with arms outstretched.

He advanced three steps before his head was separated from his shoulders by the Captain of the Guard. Rowl was Pike’s brother, but the thought of another man wanting Nacia was suddenly unbearable to him. Before Rowl could take his brother’s place, he felt Cort’s blade slice open his back on its first stroke and hamstring his lower legs on its second. Then, as the Captain fell, he instinctively pivoted and buried his saber in Cort’s heart.

The three bodies landed in the sand within moments of each other.

A wail of anguish escaped Nacia as the purple butterflies settled back into the fabric draped from her shoulders. Jewell dropped to her knees and covered her eyes.

Song stepped up to Nacia and touched her arm. “Milady, Rowl still lives.”

The Captain lay on his back while the blood was abandoning his body to mingle with the sand.

“We should spare him this misery,” said Syisha as she picked up a saber. “Does anyone know how to use one of these?”

“I have trained with ceremonial swords,” offered Jewell as she knelt in the sand. “But only for the stage.”

“I’ll do it,” said Nacia. She knelt beside the dying man. “Thank you for your service,” She said as she bent to kiss his forehead.

For a moment, the pain left Rowl. He smiled and closed his eyes as the slightest touch of Nacia’s lips caused the flesh to evaporate from his skeleton like a sigh in the wind.

“How can any man be so heartless?” Nacia Oriandra turned to confront the Nightling Thaumaturge.

“It was your wish to be the most desired woman in the Five Kingdoms.” Cagi looked offended. “I am merely your servant.”

“Men desire most that which they can never possess.” The birds that formed his cloak became restless once again. “Don’t blame me for human nature.”

With that, the tall man’s form dispersed into a flock of ravens and took wing. A moment later, the four women were alone on the beach with a launch they could not sail and three dead men at their feet.

The first thing Durn asked himself when he opened his eyes was, “Why is there a flock of ravens flying over me?” The second thing was, “Where the hell am I?”