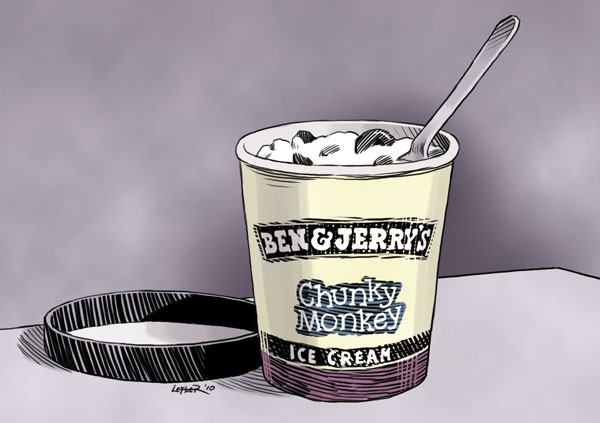 I wonder if anyone following this Journal knows whether there has been a scientific investigation to prove something ice cream enthusiasts have long held to be fact? To wit: ice cream eaten directly from the carton tastes better than ice cream eaten out of a bowl.

When my wife was my girlfriend, and the time came to meet the family, it was also time to introduce her to our desert ritual.  After the dinner table was cleared, my father took several cartons of Häagen-Dazs from the freezer and we passed around spoons. The look of alarm on Lynn’s face made me think our relationship had gone as far as it would.  This type of barbarism wasn’t tolerated in her household. But to avoid being rude, she picked up a spoon and reached for the Cookies & Cream.  It was closest.  After one bite, there was no turning back.  Next came Rocky Road, followed by Coffee and Vanilla Swiss Almond.

It is the belief of the Lefler-clan that, despite manufacturer’s claims to the contrary, the lids of ice cream cartons are not reusable. For this reason the pint containers are preferable if you’re dining alone.  Quart size if you have a friend with you, but don’t break out the gallon cartons unless there are enough people at the table to get the job done.  Letting uneaten ice cream melt would be sacrilege.

I’m happy to report that Lynn and I are still together and still eating ice cream the way it’s supposed to be eaten.  But on a sad note: The carton of Chunky Monkey that modeled for the above drawing is no longer with us.