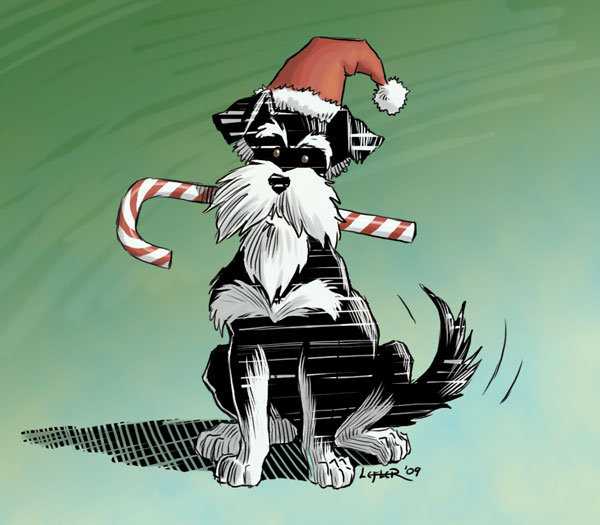 The Peril of Originality

I’ve known would-be writers who never got their first sentence on paper because they couldn’t find an opening line that had not been written before.  The problem with originality is that it is an adjective other people use to describe your work.  You shouldn’t use it yourself.  If you are writing with words (as opposed to pictures) it’s a good practice to curtail the use of adjectives and adverbs in favor of verbs and nouns.  To understand why adjectives are the enemy of creativity let’s look at the subject of directing actors.

When you work with actors you shouldn’t tell them what to feel.  Asking an actor to be sad, or frustrated, or excited is called result directing.  If you are a director, or plan on becoming one, it’s good to remember this simple formula: result directing=bad.  As human beings we don’t have control over our emotions; they are spontaneous reactions to stimuli.  When you attempt to force an emotion it leads to affectation and false performances.  So how do you direct actors if you can’t tell them what to feel?

The answer: by telling them what to do.

Here’s an example.  I’ll make it quick since this post is about visual writing, not how to be a movie director (I’ll get to that subject later).  Let’s say you have a scene where a woman is trying to get a loan from a bank official.  The script says the woman is “angry” and the official is “blasé”.  You could take the actress aside and tell her that she has never asked for help before, but it is vital that she gets the money now; she must convince the bank official how dire her situation is.  And then you take the actor aside and say: “this woman comes in every week with a different hard luck story.  She’s always trying to cheat the system. Be polite, but ignore her pretense of desperation.”  Now get out of the way and let them play the scene.  Although you haven’t told the woman to be angry, anger is likely to come out, but in a spontaneous and natural way.

Telling yourself to be original is like giving yourself result directing.  It will lead to affectation.  If you succeed in coming up with an opening sentence no one has written before you’re likely to find out why.  Instead of trying to be original when you write and when you draw strive for being honest and specific.  Honesty means that the characters you create are real in your mind; that they do things you believe they would do, and not things that are convenient for the plot.  Specific means avoiding cliché; that when you write a description, or draw an expression, it belongs to that moment in your story and is not interchangeable with any other.

On the subject of opening sentences, here’s one of my favorites: “Once upon a time, there was a woman who discovered she had turned into the wrong person.” It’s from Anne Tyler’s Back When We Were Grownups and it has found its way into many people’s lists of the best first lines from novels.  It works for me because it belongs to the story that follows and is true to the character it describes.

If you succeed in being honest and specific, originality is likely to be the byproduct.

Sometimes I worry about my wife’s fascination with the predatory insects she finds in her garden. 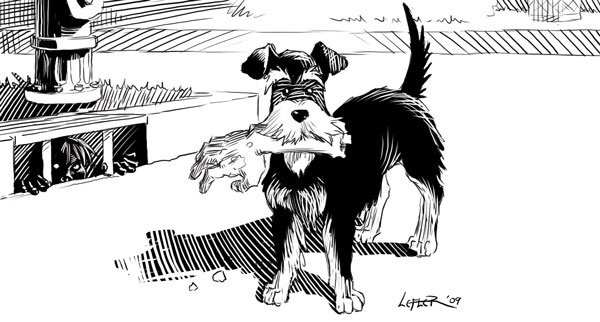 Twice a day I venture from home with a Miniature Schnauzer by my side. Women smile. “Ahhh — he’s so cute!” they say. I assume they are referring to the dog.  Ziggy would take exception to this if he understood human speech. These walks are not for pleasure. He is on patrol.

Ziggy sniffs as we go and I can see him making mental notes of “hot spots”, mostly near storm drains and man hole covers; places where “they” are likely to emerge.

Later, when my wife and I are asleep, I know he sneaks out and hunts the undead.

Most people think Miniature Schnauzers were bred to catch vermin.  Not true. In fact, their original purpose was to track down zombies, and rip them limb from limb. Ziggy must be particularly good at it.  How do I know?  Consult the facts. In the two years since we adopted him there has not been a single reported incidence of malicious behavior from animated corpses. Not a single brain has been eaten. Not one!  The only possible explanation for this is that Ziggy dispatches all zombies before they create mischief.  I have been tempted to follow him on his nocturnal excursions, and witness this activity first hand, but I don’t have the stomach for it.

Why does he do it?  Why risk life and paw to protect innocent people?  I’ve spent long hours pondering this question and come to the conclusion that it is simply what he does.  It is what he was born to do.   Ziggy asks nothing in return except a bowl of kibble in the morning, a dried chicken breast in the evening and a comfortable couch to nap on when he’s weary from combat.

But I sleep better at night knowing my brain is safe inside my head and there is a Miniature Schnauzer on guard outside the door.