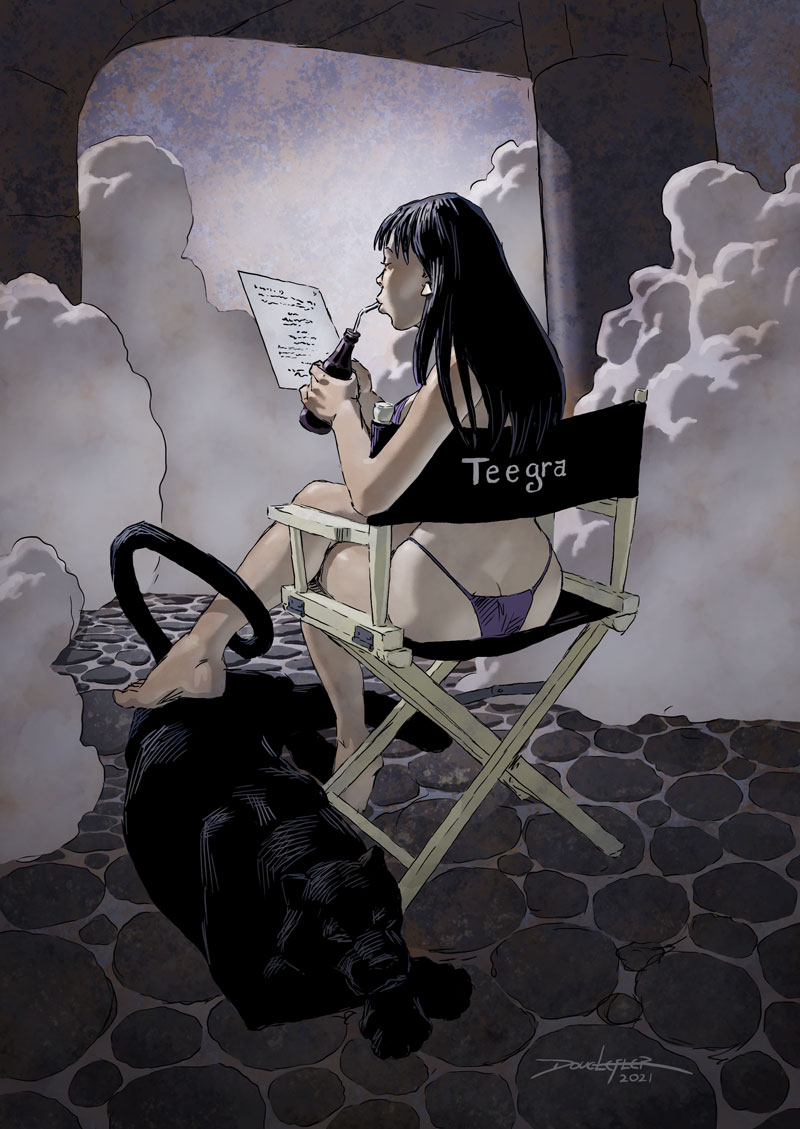 “They’re bringing Frank Frazetta around for a tour!” my co-worker informed me. I was at the drawing board in my cramped office. Indirect light filtered through my window that faced the courtyard of our building.  “But we’re not supposed to ask for his autograph.”

“The boss thinks it would be unprofessional.” My co-worker slumped under the weight of this mandate.

“Go away,” I told him. “You and I never had this conversation.”

I wrote and illustrated for a small production company that shared a floor with a Hollywood casting agency. Outside my window, people frequently gathered in types.  These occurrences were more bizarre than it sounds. We don’t usually see twenty short, stout Italian bakers, fifteen Asian American police officers, or thirty middle-aged, balding biology teachers sitting together while trying to ignore one another. In 1981 this casting agency was working on FIRE AND ICE. On my first day in that building, I arrived to find the courtyard filled by twenty voluptuous, dark-haired, almond-eyed women in string bikinis. They were auditioning to be Frazetta girls.

I had spent the last four years working in Disney Feature Animation, and before that, in the insular environment of art school. So as I absorbed the spectacle now before me, I thought: “Is this what it’s like in the outside world?”

Several months later, I was in my office early when I heard voices coming down the corridor. Three men appeared outside my office window. One of them was Dennis Gallegos, the casting agency owner who would become a producer on FIRE AND ICE. The second was Ralph Bakshi, the film’s director. He was the tallest and the loudest of the group, and he stopped abruptly to look at the illustrations on my walls.

Dennis replied, “It’s a film project that these people are developing.” None of them noticed me sitting behind my drawing board.

“Looks good enough to steal,” Bakshi pronounced before he and the casting agent continued on their way.

The third man, shorter, older, and significantly more fit than the other two, lingered a few moments to study my art. It was Frank Frazetta.

“What medium do you use?” Frazetta asked me when he stopped by my office later in the day.

“Pastel,” I answered. “Only because it’s fast.”

We were not alone. The casting agent was there with my boss (the two of them were friends) and several of my co-workers. I wasted no time in taking out my copy of The Fantastic Art of Frank Frazetta 1 and asked if the artist would sign it. It fascinated me to see that Frazetta wrote the inscription, but he sketched his signature, and you could see when he switched from one mode to the other.

I imagine my boss was annoyed, but I feigned innocents and avoided eye contact. Finally, when he saw how gracious Frazetta was to an adoring fan, my boss turned to the rest of the staff crowded in the doorway.

“Alright, get your books.”

None of us knew in advance Frazetta was coming, but it wasn’t surprising that we all had copies of his book in our offices. In the early 80s, everyone in my business did. After signing all of them, Frazetta took one last look at my wall of illustrations.

He nodded and said, “you’ll make it.”